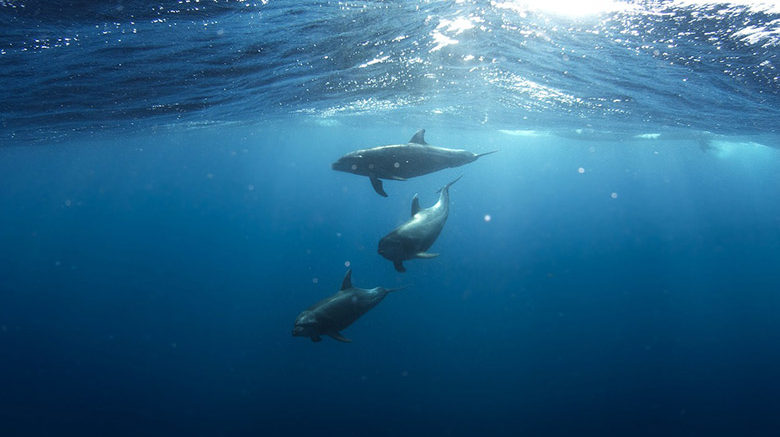 Three quarters of the planet Earth is covered by water. A majority of the planet’s solid surface is abyssal plain, at depths between 4,000 and 5,500 metres (13,100 and 18,000 ft) below the surface of the oceans. The solid surface location on the planet closest to the centre of the orb is the Challenger Deep, located in the Mariana Trench at a depth of 10,924 metres (35,840 ft).

Although a number of human activities are conducted underwater—such as research, scuba diving for work or recreation, or even underwater warfare with submarines, this very extensive environment on planet Earth is hostile to humans in many ways and therefore little explored. But it can be explored by sonar, or more directly via manned or autonomous submersibles. The ocean floors have been surveyed via sonar to at least a coarse resolution; particularly-strategic areas have been mapped in detail, in the name of detecting enemy submarines, or aiding friendly ones, though the resulting maps may still be classified.


An immediate obstacle to human activity under water is the fact that human lungs cannot naturally function in this environment. Unlike the gills of fish, human lungs are adapted to the exchange of gases at atmospheric pressure, not liquids. Aside from simply having insufficient musculature to rapidly move water in and out of the lungs, a more significant problem for all air-breathing animals, such as mammals and birds, is that water contains so little dissolved oxygen compared with atmospheric air.

Nothing is softer or more flexible than water, yet nothing can resist it.

The density of water also causes problems that increase dramatically with depth. The atmospheric pressure at the surface is 14.7 pounds per square inch or around 100 kPa. A comparable water pressure occurs at a depth of only 10 m (33 ft) (9.8 m (32 ft) for sea water). Thus, at about 10 m below the surface, the water exerts twice the pressure (2 atmospheres or 200 kPa) on the body as air at surface level.

For solid objects like human bones and muscles, this added pressure is not much of a problem; but it is a problem for any air-filled spaces like the mouth, ears, paranasal sinuses and lungs. This is because the air in those spaces reduces in volume when under pressure and so does not provide those spaces with support from the higher outside pressure. Even at a depth of 8 ft underwater, an inability to equalize air pressure in the middle ear with outside water pressure can cause pain, and the tympanic membrane can rupture at depths under 10 ft (3 m).

Because absorption is greater for long wavelengths (red end of the visible spectrum) than for short wavelengths (blue end of the visible spectrum), the colour spectrum is rapidly altered with increasing depth. White objects at the surface appear bluish underwater, and red objects appear dark, even black. Although light penetration will be less if water is turbid, in the very clear water of the open ocean less than 25% of the surface light reaches a depth of 10 m. At 100 m (330 ft) the light present from the sun is normally about 0.5% of that at the surface.

The euphotic depth is the depth at which light intensity falls to 1% of the value at the surface. This depth is dependent upon water clarity, being only a few metres underwater in a turbid estuary, but may reach up to 200 metres in the open ocean. At the euphotic depth, plants have no net energy gain from photosynthesis and thus cannot grow.